Found myself at a little party in the sunshine on the weekend (that was a long time coming – Welcome Summer!) which was so pleasant.

After my Man had taken over the Barbie, true Aussie style (he is at one with a BBQ, even if it was over hot coals), we were chatting about Australian accents, and lingo.

Both of my parents are from London, and emigrated to Australia over 30 years ago, so my accent is not as strong as others.  (I was stuck between a rock and a hard place as a kid trying to decide whether to call it a Duvet or a Doona…I renamed it ‘The Cover’!).  We discussed how some accents are stronger than others and my awesome friend was comparing accents from Australia’s Next Top Model.  She couldn’t remember for the life of her the name of the little island this twangy top model girl came from.  Could it be Fraser Island? No….. Tasmania?  Why yes! While it is an Island, it is also a state of Australia. We had to giggle. 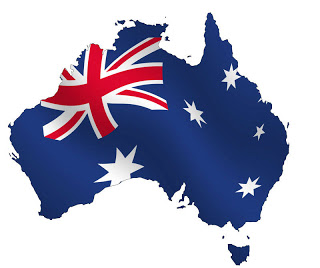 I think, the way Australians speak is different to people from Jersey.  We are louder (well I am…but maybe I’ll blame my Mediterranean heritage for that one), and are generally pretty honest and open, sometimes shockingly.  There are also a lot of things that Aussies say, which leaves some people with a blank stare, wondering what on earth we are actually talking about (if they can keep up with the speed in which we talk).

Seeing as I’ll be blogging to a Jersey based audience, I thought I’d put some things out there now, in case you are all struggling to understand me in the future, or if you want to move there or even just visit on holiday.  Get your notepads and pens out kids!

Here is a Glossary of Australian Slang (excuse daggy music).

Some of my faves (aka Favourites) include the following, and you may find them on my blog (or in real life) in the not too distant future.

So what do you reckon – aka What do you think?  Any Aussies in Jersey out there who have more to add?  What are some things you’ve heard Aussies say and you’ve questioned their meaning?

Katherine has a background in special education, early years childcare, and has a BA and MA in the creative and performing arts. She blogs at Creative Playhouse about her children’s activities and interests, including offering an Ecourse on Connecting Family through Creative Play, she also runs parent communities, is a designer and a work at home mum to Jake (3.5) and Poppy (15 months).

We Want to Feature You!

Mummyology is now open to submissions. You can be featured in 3 different ways. You can submit a featured link back to your own post,...

I am on this new kind of journey, seeking abundance and joy in my life as a parent, woman and creative spirit; trying to find ways for...

With 2012 drawing to a close, it's that time of year when we're trying to go in two different directions at once.  On one hand we want...

What do you do with all your kids art? I used to have it sprawled all over y kitchen cupboards, on every space of dresser shelf etc and...