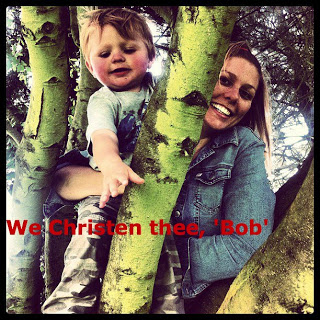 Sonny acquired the nicname Bob when he was about 10 days old. This was marked by the demise of our lives as we knew them, and the descent we’d made into somewhere sleep deprived and dark which we occasionally referred to as hell.

I’m OK admitting this; there were times when we actually did say ‘this is hell’. I definitely said it more than Ed did and remember once looking him square in the eyes and saying ‘this is a mistake. We’re never doing this again’ and absolutely meaning it. When I was feeding young Bob one evening, Katy Perry was performing on the telly. I felt overwhelmed with jealousy, not because she’s stunning and slim and talented and successful and loaded, no. I was simply jealous of her because she was free…

The name Bob came about on a day when we were trying to see the funny side. We were lying in bed listening to Sonny on the monitor, as he began warming up his lungs ready to begin a good session of intense screaming.
‘He’s evil’ I said. Ed agreed.
‘He’s basically the devil’ he said, as the crescendo of high pitched hell-music began. ‘He’s Beelzebub. If you listen to the monitor closely, you can hear his hooves clicking against the side of his cot’.
‘Yes’ I replied. ‘And if you leave him much longer he’ll probably set fire to his bedroom’.
And that was it. Beelzebub was lovingly shorted to ‘Bob’.

Problem is that it’s now stuck, and I want to stop it before he becomes conscious of his own name, but I can’t, because it’s funny, and it’s cute. He’s no longer a representative of the underworld, in fact sometimes he can be better behaved than Jesus Christ himself, but during this transition he’s picked up other, cuter names; Bobage, Bobbins and Le Bob being the most recent ones. We’ll just have to try to faze it out before Sonny is lost forever and we have a confused teenager wondering why his name and his birth certificate don’t reconcile.
During those early weeks I learned his personal likes and dislikes fairly quickly. The only lullaby I know well is ‘You are my sunshine’ and after 44 ineffective choruses of that one evening, in desperation I put MTV on. Instantly, a calm descended on the flat, as the soothing sounds of Flo Rida filled the speakers. With a bit of jigging around from me and a few more frantic rifts and swear-y lyrics from the likes of Kanye and Muse, Bob was sleeping like a fallen hells- angel. It may have been an illusion of the light from the lamp bouncing off my drooping eyelids as they hung slothenly over my dried out eyes, but I was sure I saw a halo form around his beautiful little ginger head.
So I’ve never sung him a lullaby since; if my child wants contemporary numbers, then I shall learn the words to as many as I can.
Until next time
“Judas, juda-a-ahs, Judas, juda-a-ahs…”.
Mum. x

How to make a baby part two.