How to throw a Peppa Pig Party 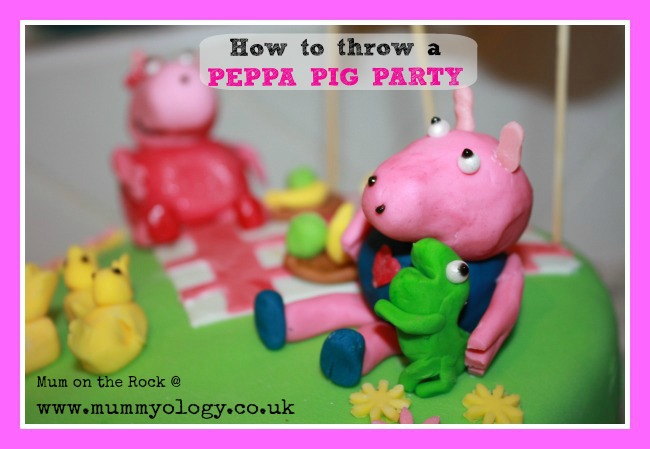 So, believe it or not, my little baby turned two this week. To say that your second childs life whizzes past you at supersonic speed is an understatement. It feels like only yesterday that I was trying to juggle a new baby with having a 2.5yr old starting nursery and now, just as my big girl starts big school, my gorgeous Freya has turned two – WOW.

I feel like I have been totally blessed having two fit and healthy girls who keep me busy and laughing a lot (most days). It’s a strange thing having two children – as you made them both with the same ‘ingredients’ you expect them to come out the same but almost as miraculously as their little life forming is, they take no time at all to show you that they are two very different people.

Bea has a great personality but is definitely a thinker and can be shy and a bit reserved at times. Freya is the other end of the scale and perhaps is everything you expect a second child to be. She can entertain herself well, she is pretty tolerant getting dragged to various events and parties following her sister; she seems to feel no pain and she has a cracking sense of humor but boy oh boy she has one talent that her sister never possessed – she can throw a tantrum quicker than a blink of the eye! It is pretty much always attention seeking and I suspect I am not the only mum of more than one child to give into her desires too quickly just so that our world can keep on turning!She is utterly gorgeous most of the time though and so as her biggest desire in life currently is to do / see / play anything involving Peppa Pig I thought our first properly themed birthday party should be planned.
It’s pretty impossible for me to write a blog without mentioning Pinterest – its simply awesome for searching for ideas on pretty much anything… I have picked up loads of great party ideas but WAIT A MINUTE…. As it’s quite a US based site… there was hardly anything Peppa Pig orientated – Panic! I might have to actually think of something  for myself! 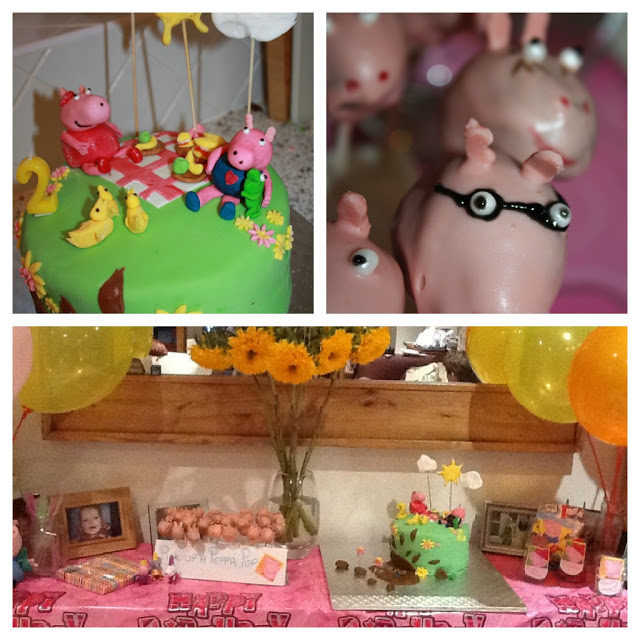 So, here are my tip tips for making dreams of a PEPPA PIG PARTY come true… 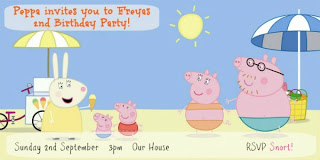 As it was only a small party with mainly family and a few friends coming, I thought I would make my own Peppa invites and simply email them around.THE CAKE

Now, I love baking and it seems to be something of a family gauntlet that has been handed over from my mum to me to try to be a bit of a novelty cake maker for family events – as my mum handed over her box of food colours and icing moulds / cutters etc a certain look of relief washed over her and now I know why! Its strangely addictive but equally tricky and I love the challenge of it. SO when Freya declared that she wanted a George and Peppa cake, my imagination came up with this…it really isn’t that hard to shape a Peppa… 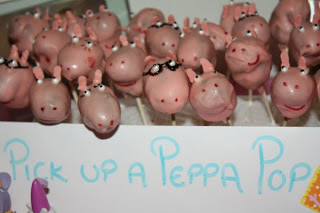 Ever made a cake pop? I was introduced to them by one of my best friends and have had a few tries since. They are pretty easy to make but a bit fiddly and these Peppa pig pops are my best so far (I am feeling quite proud and boastful about them!)
I got the idea for them from this yummy mummies website. The kids and the grown ups all loved them!
For other simply amazing cake pop ideas take a look at the website of the Queen of Cake Pops herself – Bakerella
I was slightly let down by Amazon and the post office as the delivery of the little Peppa Party hats, table cloth, plates and peppa pig slinkies for going home pressies never arrived (and they still haven’t!) So, I felt the need to pimp up my peppa party myself.
I printed off some of my own labels for Muddy puddle (chocolate yahoo) milk and turned some boring bottles of bubbles into Georges bubbles which I gave the party guests along with some home printed Peppa colouring in pages and everyone got my all time favorite take home pressie – a balloon on a stick (so much cheaper than helium and just as much fun!)
I have a bit of a hang up about party bags being filled with useless stuff that costs parents a fortune and ends up in the bin and thought these bits along with a couple of hair clips and a Peppa Pop was a nice little bag full of loot for the little ones – they are only two after all! I had meant to make some peppa pink playdough to add in too but never quite got that far! I also indulged the other mummies and daddies a bit and raided the aisles of Marks and Spencer for some supplies of their Percy Pig fizzy tails, marshmallow noses and Percy Piglets – delicious and perfectly piggy themed!With lots of simple party games like pass the parcel and musical statues and a lot of enormous OINKS we all had a fab afternoon and I think Freya was Peppa’d out – who could ask for anything more?

Love, Mum on the Rock 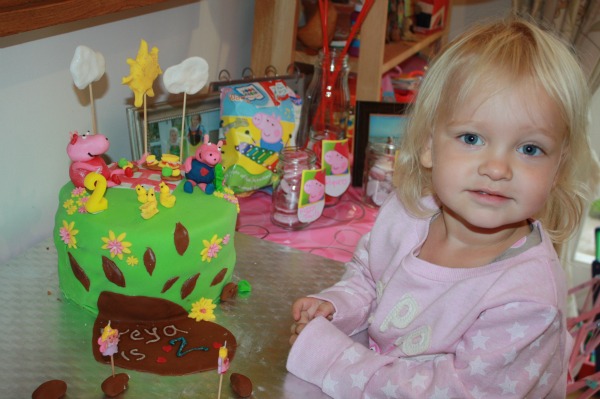 Just a little post from us this week as we are in the middle of Easter school break and we have daddy off for a week of it so are FAR TO...

1 thought on “How to throw a Peppa Pig Party”