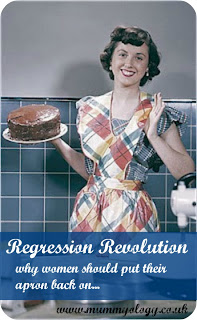 I’ve mentioned before that I’m scared of the world and where it’s going. I wonder sometimes, although admittedly more for conversational dramatic effect than genuine concern, if by the time Sonny has grown up all communication will be via text messaging or similar, and we will re-evolve to have no vocal chords?

Don’t laugh, it could happen.
It doesn’t worry Ed that much because Ed is busy not worrying about anything, it seems it’s just me that has concern for the future and our son and the world and defunct anatomical parts. And with that in mind, I have refocused my concerns from batting the future away from myself and my family like a giant, angry, motorised, computerised, technical-digital-virtual-wasp, and have decided on a new cultural fashion, which I shall be championing with effect from the new year.
Regression is the new progression.
Allow me to explain. I have some feminist values. I am glad we got the vote, and if I had any interest in politics I might use that vote- assuming X Factor wasn’t on the telly on election night and the polling station was within a five minute walking distance to my house. I am equally pleased that women now almost earn as much as men, and I am glad that lesbians are allowed to hold hands in public. But I have no shame in saying this- although I like my job, and I like studying for my impossible bookkeeping course, given the choice, I would live in a moderate sized terrace house, wear an apron a lot of the time, cook food from scratch, have four children, two dogs, a parrot, large hips and wobbly thighs (I already have those, and thankfully they transcend era’s successfully).
It really isn’t a case of being lazy. It’s a case of wanting to be alive in a happier, simpler time. I find it ironic that we have so many conveniences these days- sat nav, iPhones, tablet computers, internet shopping, pedometers, ready meals, house cleaners, fuel efficient cars, microwaves, dishwashers, anti-rust, anti-sweat anti-freeze anti-stress,  and yet we’re all working harder, moving quicker, sleeping faster and only stopping to stress out about how hard, quick and fast life is.
So I propose this. Lets just stop.
Women: stick an apron on and whack some orange and brown wallpaper up (I’m embracing the 70’s as my decade of choice and admit that the fashion is shoddy to say the least but I’m still up for it). \
Government: Make housing affordable. It’s almost hysterical how much a house costs these days. Either start paying us in relevant terms or watch us all move to Bulgaria where it’s cheaper.
Apple: Actually, I really don’t think I could live without your iPhone, but I propose a different genre of apps, for example iBake- a basic cake recipe application. iSpray- an application which releases 1970’s quantities of hair spray when you’re out and about. iWoof- something that communicates with dogs to let them know it’s time for dinner or walkies. iScold- generic app for use on husband or children when they come in from playing outside and get mud on the orange and brown carpet.
Men: stay as you are. Just try to earn more and have your hand down your pants less.
I’m up for starting a regression revolution. Who’s with me?

Reasons to cuddle your kid!

The things we find the hardest…

Katherine has a background in special education, early years childcare, and has a BA and MA in the creative and performing arts. She blogs at Creative Playhouse about her children’s activities and interests, including offering an Ecourse on Connecting Family through Creative Play, she also runs parent communities, is a designer and a work at home mum to Jake (3.5) and Poppy (15 months).

I remember buying a fabulous book when Sonny was ready to be weaned. It was  a lovely, colourful book of simple, basic puree recipes ....