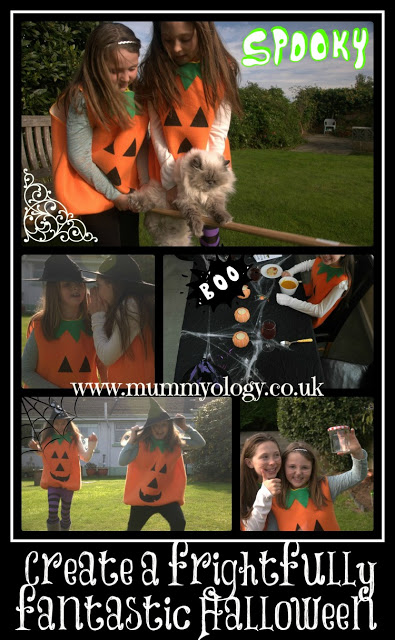 Stepping sideways from my usual nutrition posts, I thought it would be fun to share some of my family’s Halloween experiences; the things my children enjoyed and remember the most.

A few years ago I set up a treasure hunt with clues that led from one spooky activity to another.  Thankfully, the weather was on our side and we had lots of fun in the garden.  This is just as easily done in your home – whatever the size of your house.  It would also be fun to get a group of parents and children together and do something similar in a park or forest.  Here are some of the spooky activities/challenges I invented: 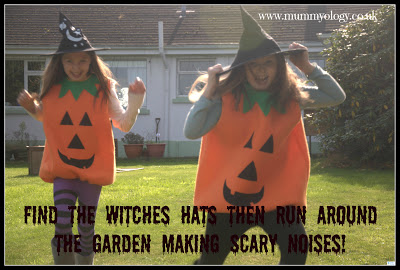 “Dress up as any Halloween character – witch, vampire, zombie, pumpkin – and run around doing an impersonation.”

Take photos of your children running around collecting clues and solving riddles to put together a photo collection (or a blog like this years later!) 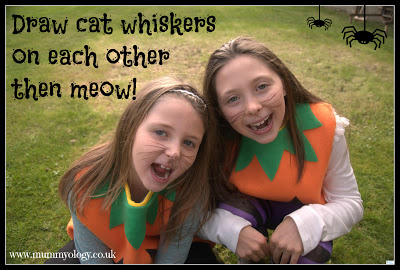 “Use eyeliner to draw a cat’s face on each other, then walk like a cat and make meowing noises!”

Tip:  Eyeliner is easier to wash off the skin than felt tip pen!!

“Try to eat the sweets without using your hands.” 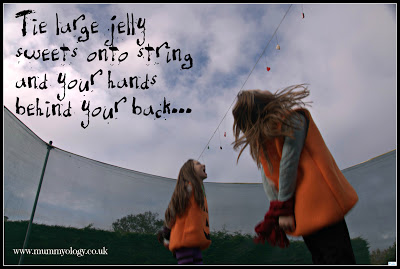 Tie their hands behind their backs with soft scarves. Set up a row of jelly sweets attached to string (similar to apple bobbling, but harder!)

I tied them across the trampoline which I thought was a genius idea…. However, it was rather more difficult for them than I imagined but half an hour of hilarity followed and they still remember this with very fond memories!

“Find the cat and a broomstick and take her for a ride around the garden!”

We had a very good-natured cat who made this next one possible!  Probably best to use a cuddly toy but I wanted to share the pictures with you.  It was such a funny afternoon!

Other activities:
Find a spider and pop it in a jar (and release it afterwards, obviously!)
Find a bucket and a stick and pretend it’s a cauldron.  Pop in leaves, water, mud, shells, stones, string – basically anything your kids can find in the garden – add a sprinkling of glitter and you have a magic potion or poisonous stew!
Who can make the most words out of the letters in HALLOWEEN?
Halloween Horror Treats 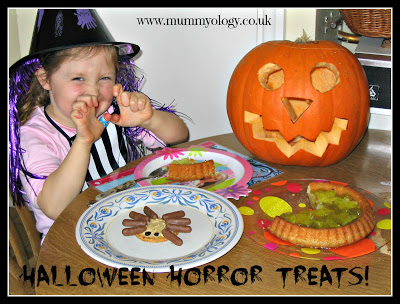 Spooky Spider Biscuits
Take one round biscuit and eight chocolate finger biscuits.  Spread the round biscuit with chocolate spread or butter icing then stick the ‘legs’ on.  Use two raisins for eyes.
Green Slimy Pie
Buy a ready made sponge base and fill with chopped fruit (I used star fruit but you could use an apple cut into star shapes with a cookie cutter) before covering with green jelly and leave to set.
Pumpkin and vegetable soup
Make a simple vegetable soup with a mixture of root vegetables (carrot, pumpkin, squash, parsnip, sweet potato) plus onion and garlic, and any other left over vegetables that need using up.  Simply pop in a big saucepan with a pint or two of stock, boil until the vegetables are soft then puree.  Serve with crusty baguette or toast.
Let the children use their imagination and set the table in any spooky manner they desire!  You don’t have to spend a lot of money on Halloween paper plates, cups, straws and table cloths.  A simple piece of black cotton material will suffice as a tablecloth (you can even dye an old sheet).  Children can draw Halloween pictures of bats, pumpkins, witches’ hats or spiders to stick on the tablecloth.  They could design a spooky menu, ice fairy cakes or make 3D models, while plain white paper plates can be decorated with Halloween inspired drawings.
Happy Halloween!
Remember:  use your imagination and keep it simple.  You don’t need to spend lots of money to have a fantastic afternoon of fun and games.  Most children are happy to be involved in a whole-family activity and just the fact that mum and/or dad is running around, being silly, laughing and having fun is the way to create positive, happy memories.
Until next time,
Lorraine

How to feed your kids well: A survival guide for dads

Don’t forget the baking powder (and other mummy mishaps!)