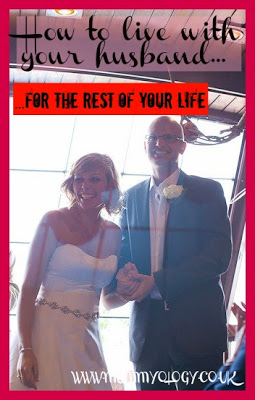 I got married last year, and have been looking through some of my old blog posts from around that time. I came across the below, which I’ll post now as a retrospective trip down memory lane, and then next week I’ll think of some more ways in which we can all live with our husbands and partners without spiralling into madness or being deported to Guantanamo. In the meantime, if anyone has any tips that they think I should include in next week’s post about living with your husband for the rest of your life, please send me an email or comment.

I’m starting to freak out a bit this evening, so rather than confront things, I thought I’d avoid and ignore and do writing instead. Not because I’ve suddenly realized that a lifetime with Ed is total, utter madness, and instead of asking for honeymoon donation money as wedding presents, I should have asked for alcohol, any type, in large quantities, to get me through the next 60 years (because I’m going to live until I’m 89), no, nothing like that, in fact I have never considered an alternative and I really do love Ed warts and all. As he sits next to me, in his boxer shorts, unwashed, picking at his sunburned skin and gently farting, I know absolutely that he is the one for me.
So it’s not that which I am concerned about. Its more the fact that I’m now on a count down of 18 days, I’m still fat around the hips, I’ve still not found the right material for my big blue dress and I don’t really know what’s happening on the day apart from that we’re getting married and then there will be some Pimms. Logistically I’ve not considered much, for example where we’ll stick Sonny when he wants to sleep, and then the next day there’s the party and the day after we get on a plane at something ridiculous like 8am to go on our Familymoon (a honeymoon for people who are taking their baby and therefore don’t expect to slot in much honey, or mooning).
Ed on the other hand, is completely relaxed about proceedings. Occasionally he’ll look up from Family Guy, or Infamous2, and say something like ‘did you book the venue’? or ‘you did send my Grandma an invite didn’t you?’ and sometimes he’ll make a bit of pre wedding preparation effort, via the method of approximately 4 x bicep curls, never looking away from the TV. It’s incredibly impressive.

I remember being told that the things you find charming about someone in the early days, quickly become irritants. I am so pleased to say that this hasn’t happened between Ed and I. No, instead, the things that irritated me in the early days continue to irritate me, but thankfully not at an inflated level. In fact now, they are more like mild irritants; less like concentrated bleach on the skin and more like your standard kitchen spray. I think that’s a good thing, it means I am calm when he insists that I’ll love what he’s eating, even when it’s roll mopped herring, shoveled it into my protesting mouth in the same way we force mashed mush into Sonny’s. My friends wonder how 2.5 years down the line I still don’t understand the strategy behind a perfectly stacked dishwasher, despite daily teachings, and I say it’s because when the teachings commence, I feel my body and my brain shut down and go into reserve power, like a laptop going into standby, just about sustaining life but incapable of taking in any new information.

This fabulous method of self survival means that I can weather all different kinds of lessons, from folding towels to salting pasta water. True, sadly I will never learn anything new, but we will continue to grow as a happy couple.
And what is marriage if it isn’t compromise? It’s the happiest compromise I’ve ever made and I can’t wait to spend the rest of my life meeting Ed in the middle.

The Appeal Of Montessori Elementary Learning

Education has a very strong influence on the kind of life children will end up leading when they grow up. Because of this, where to send...

I am a member of the Collective Bias®  Social Fabric® Community.  This Coca Cola shop has been compensated as part of a social...

2 thoughts on “How to live with your husband for the rest of your life part one.”